Here at your public library we thoroughly enjoyed August 21, 2017, the day of the Solar Eclipse. The full shadow of the moon traveled across the United States in a narrow band from the Pacific Ocean to the Atlantic Ocean as a result of the total solar eclipse. The rest of the United States and North America observed a partial eclipse, where the Moon covered only a portion of the Sun. The Eastern Shore falls outside of the narrow band, so we observed a partial eclipse. The last total solar eclipse that occurred in the United States was nearly 40 years ago and the next one will not be until 2024. 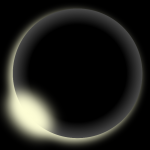 This event offered a great opportunity for our library community to celebrate science.

In Nassawadox and Accomac, we displayed NASA’s live streaming of the eclipse as it occurred across the United States.

In Accomac, we shared a few pairs of our own eclipse glasses with patrons visiting the library and took turns viewing the eclipse at different phases. We also had some kid fun creating pin hole projections of the eclipse using cardstock and a hole punch.

In Accomac and Nassawadox, during the two weeks before the eclipse, we handed out “free” eclipse viewing glasses until we ran out. We asked those that received glasses to do one of the following:

Don’t forget to send your photo or sentence to us at youthservices@espl.org. We are still posting as many sentences and photos as we can on our social media pages (Facebook, Twitter, Instagram).

If you want to continue your “eclipse experience” for a while longer, here are some wonderful online resources you will find interesting:

The Eclipse Megamovie Project – this group will gather images of the 2017 total solar eclipse from over 1,000 volunteer photographers, amateur astronomers, and others and then combine them into a “megamovie” to share with the public. https://eclipsemega.movie/